R- was in the barn, and spotted (because it jumped off the overturned water tub he was planning to sit on) a pale gray preying mantis (try saying that four times fast!)    I’m off to BugGuide.net to see what I can find. 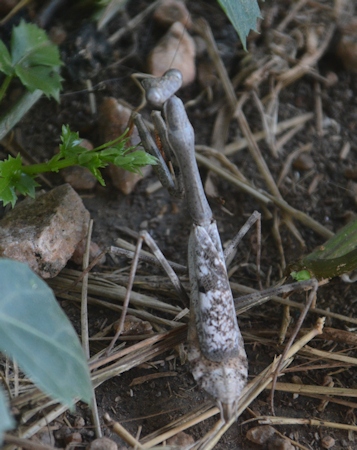 Adult (you can see the wings folded on her back) female (shape) mantis.  A beauty, but quite skittish.   There’s a cow-itch vine growing on the south barn lot fence and out of the ground right where the corner of the loafing area is, that’s extended a strand into the barn because the water tubs overflow sometimes and Rags dribbles his water a lot right there.  I moved two tubs away from her to get enough light and when I was done we moved them back to give her more sense of safety.  She did not want a Leatherman with its measure showing laid down beside her (no, not touching…but she wanted no part of it) and got quite frantic trying to climb the metal wall, so I gave up on that but I believe she is somewhere between 2 and 3 inches long.  More pics to be added later.  The taxonomists are playing games with this genus, so these mantises in Texas and other “far-south/west” examples may end up with a different name in a year or two.

This is the fourth species of mantis for our species list.   The others are:

Can’t find my image of this one, so the page gives several others’ images.  Very slender light brown, mantis, a prairie mantis.  My image isn’t in the file where it should be, alas.  I suspect the original was on one of the external hard drives that failed; I used to move the originals to those backups, but then one time I wanted to access one, it had ‘frozen.’

I spotted this elegant light green mantis with a white line around her wing covers (I think wing covers) peering down into the middle of a Texas Blue Bell (our largest gentian, actually; we have four species in the area.)   The old women in town told me about going out to gather them to make bouquets and flower crowns of them.  They come in shades from lavender to this gorgeous rich purple.   It’s had three scientific names since I first learned   Eustoma grandiflora…..next came Eustoma exaltatum, which I like, because it’s how I feel when I see a patch of them…exalted…but now it has a far more boring Eustoma russellianum. This flower deserves to be named for itself, not for a person, no matter how great a botanist he was.  Mutter-mutter-mutter. 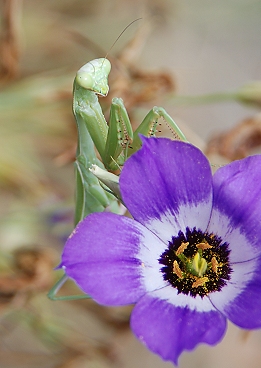 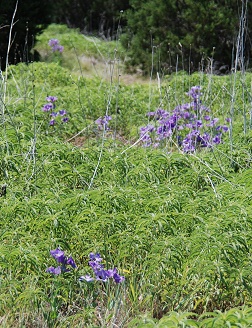 Here the flowers are growing amidst young Maximilian sunflowers that won’t bloom for months.

Minor Ground Mantis, Litaneutria minor, on the trail across Cactus Flat in the Dry Woods.   Identified via Eric Eaton at BugGuide.net and confirmed by another specialist as well.  These mantises are very small and I was lucky to see it…it could easily have been stepped on. 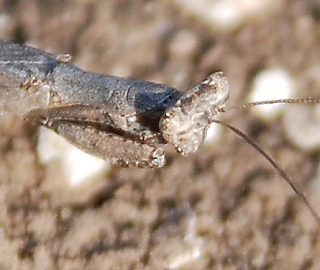