Today I went up to Fox Pavilion, added water to the wildlife waterer, and then headed *down* the North fence Trail and not up it.  Also about an hour later, so the sun would be higher.  And as usual…getting the light right makes the pictures much, much better.

There were four Black Vultures sitting together this morning, two adults and two fledged chicks–and those were the birds I photographed yesterday.  Same camera, same lens, better light.   Not using flash (too far away…this was taken with a zoom lens all the way out to 300…and with my Nikon 7100 DSLR, a camera I’ve been using for years.  All the images have been cropped, then re-sized for efficient use in email and here, down to 450 pixels on the long side.)

So…here’s the Undertaker Family with the sun on my side of them. 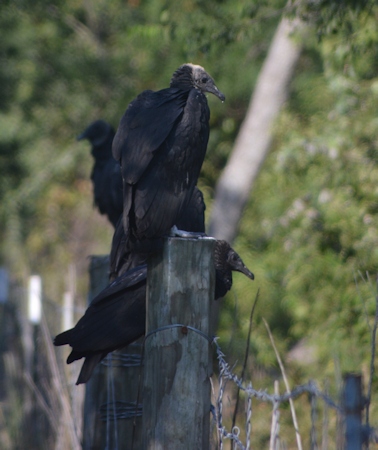 At the far end, one’s facing south (slightly out of focus, probably 6 feet or more from the front bird, who reminds me of pictures of an English courtroom with the lawyers wearing little wigs and the judge wearing one with ‘sideburns’.   Like our front guy.)   The other three are facing north, an adult nearest to our youthful “judge”, another juvie, and then the adult looking the other way at the far end.  The Judge, on this post, and the adult on the far post, are based higher than the two in between, perched on a pipe between the two posts of this line brace.

For an instant, the two “middle” birds were both peeking out at once, but I didn’t catch that; the peeking bird, watching me, is an adult with no “wig.”  The far end bird extended its wings when I got another step or so closer.   None of then have their necks extended. 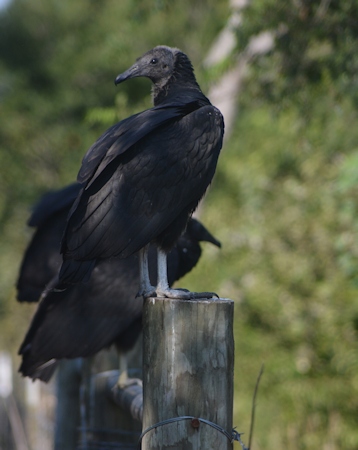 And below is the same image, same crop, adjusted via software, and resized to 600 pixels long side. 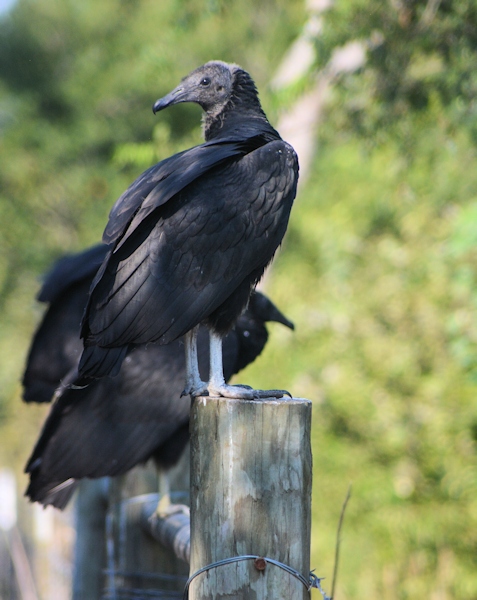