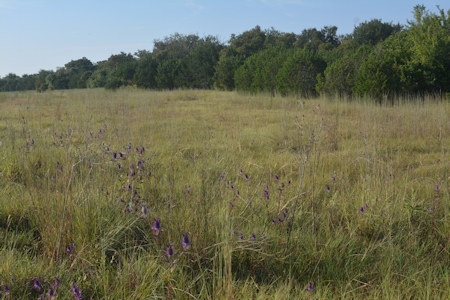 Views of the grass to woods margin: I was north of Center Walk, where the Indiangrass had stopped, and the only tallgrass is Little Bluestem.  The purple thistle-y looking plants aren’t thistles at all, but Eryngo, which is related to pineapple.  Distantly.  The grass has greened up after six-tenths of an inch of rain night before last.  All the vertical “brushstrokes” are Little Bluestem, which is slowly moving up-slope and taking over from the “improved pasture grasses” that had been grazed to the nub when we bought the place.

Some closeups of Eryngo, one including an example of local invertebrate fauna.  (The charming little ladybug beetle on the tip of a little bluestem stalk couldn’t be photographed because I can’t sway in the wind to stay focused on it. 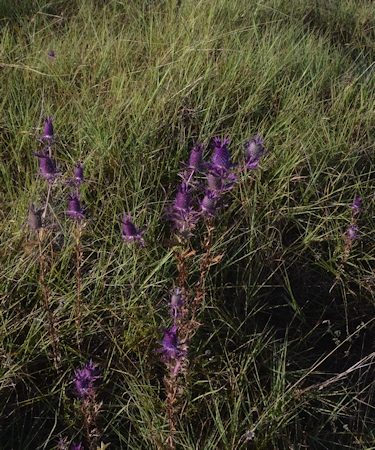 It really is royal purple…and silver flashes from the leaves.  The grass there is probably KRB, King Ranch Bluestem, a common pasture grass from Africa, but there are scattered plants of Silky Bluestem (another import) and even Silver (or Sugar) Bluestem, a native. 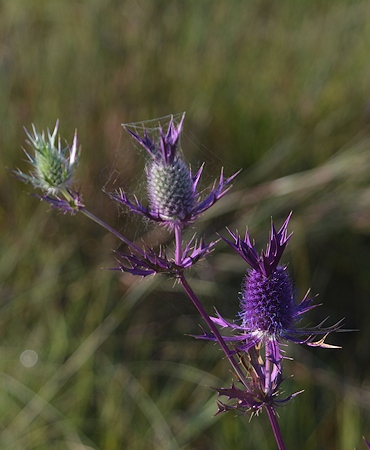 Although it gets stemmy and raggedy looking as lower leaves turn brown, it’s otherwise elegant and beautiful in all stages of flowering.   The first opening is a lovely silver-green with bright silver leaves and just touches of purple…then it’s about half and half–green, half-purple surrounding bay purple leaves, and then it goes ALL purple… 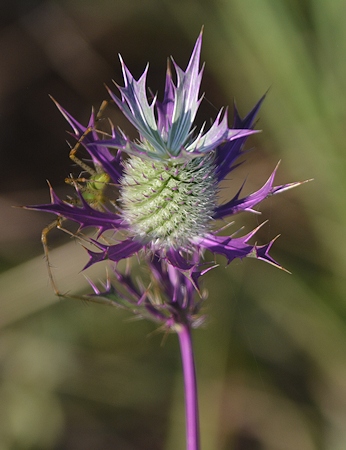 Green lynx spiders commonly hang out on Eryngo (they’re not the only spider but one of the more obvious) and I have photos of them from previous years.  Notice that blob of green that’s not the Eryngo, and the lanky, orangish, sparsely-haired spider legs on the left of this Eryngo.

What else, besides vultures and Eryngo?   Lots more than I took pictures of, but a good number of pics. 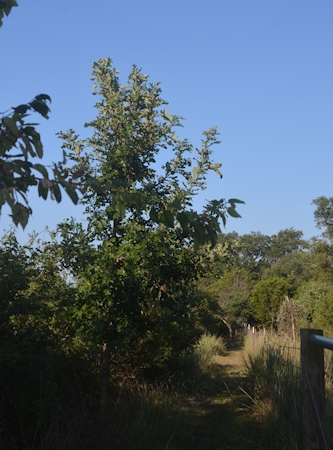 Bur oak planted near the north fence years ago…many were planted, this one survived. 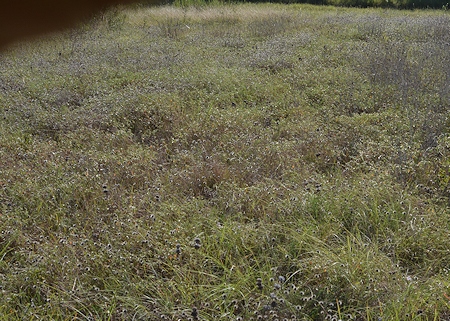 South grass meadow, below the Dry Woods knoll. This morning we had especially heavy dew, and it stuck in the interstices of the seedheads of wildflowers.  As I walked back toward the house, the whole area appeared silvery.  You can see the round heads of gaillardia at the bottom margin, just right of center: they glow in the light anyway, but with the dew it’s a glittery-glow.  And they’re all through the area.  I had to hold my hand partly over the lens to shield it from the sun angle or the whole thing would’ve glared out, but…it was a sight to see.  Foreground grass is partly Meadow Dropseed, with tufts of Curly Mesquite, Texas grama, and Buffalograss in the mix, lower than the dropseed.

Progress in physical conditioning (how far I can walk, how fast–both improving) and weight, less than a pound to go to be at the halfway mark of the 60 pound goal.

4 thoughts on “80 Acres–Other Views of Fall”