Sober, serious, professionally dressed in black and textured gray, the undertakers spend their off hours sitting around in trees or on fenceposts–or, depending on space availability, on cellphone towers.  Black blots with wrinkled gray necks and matte gray heads, dark eyes and large unpleasantly suggestive beaks.  Sometimes they soar aloft, first observing from their cousins, the turkey vultures, where there may be thermals to make flight easier.  Their own flight, so much superior to ours (for which of us can hang onto a fence by our toes and then glide across a pasture to a stock tank for a drink?)  is derided by some ornithologists as “clumsy”.   Admittedly, their takeoffs and landings, especially from trees in leaf, or from that fence or the ground, often have an amateurish look, but once high enough to glide, they’re graceful enough, and their courting flights (true of the Black and the Turkey vultures both) showing amazing skill.

To fully appreciate the undertakers, walk up on a pair sitting on adjacent fenceposts.   They will look at you, with solemn expressions…the world is full of woe, things are going badly…and by the way, are you dead yet?  No?  Then what are you doing here?  Please respect the solemnity and silence of this place, unless you’re a client, in which case fall down and don’t move while we go to work on your carcass.  If you persist in standing there alive and breathing–and disrespectfully speak to them–they shift from foot to foot, look at each other, look back at you, and shuffle again.  This is a situation for which they are not prepared.  She’s not dead yet.  We can’t…we can’t…do our job…she’s still THERE.  Making sounds.   Maybe she brought us a dead thing to take care of?  No…her hands are empty.

With a ruffling of feathers, one of them will stand up a bit taller (not very), ruffle some feathers, and then, reluctantly, with loud “flup-flup” sounds, struggle into the air and gain just enough height to fly a short distance.   If it lands in a tree or some brush, there were be a struggle…cracking twigs, thrashing leaves.  The one that doesn’t fly will look at you reproachfully.  See What You Did?  Why Don’t You Die?  Eventually, if you continue to stare rudely or offer to come closer, this one too will heave itself into the air with as much drama as possible.   It’s unfair.  It’s undignified.  Why should a respectable undertaker bird have to take flight at This Time of Day, This Season of the Year, This Moment?   Sometimes one of them will slowly glide until it comes to ground  and then waddle on, glancing back now and then to see if you’re following.   Killdeer play the part of “Follow me, follow me, I’m nearly dead” much better than the undertakers, who have a slightly (!) risible sense of dignity (waddle, waddle.)   The female killdeer staggers, drags a wing, zigs and zags, gives little agonized peeps…until she’s led you far enough away from her very vulnerable eggs and then shoots into the air with ineffable grace.  But the undertaker who’s undertaken to be the lure…merely waddles slowly along, soundless and offering no drama other than a large, slow, black bird rocking from hip to hip, a little clumsily.   If you follow too fast, and try to catch one (Don’t, is my priceless recommendation.  You do not want to catch a Black Vulture.  You would regret it if you did)  it will merely flup-flup-flup faster until it’s gliding again, and then more until it’s higher than your head, and if you really scare it you’ll get a load of vulture poop, corrosive and stinking.

If you have either the Turkey or the Black Vulture around, one fun game to play with them is to find a place where you can lie down on the ground (ground not inhabited by fire ants or rattlesnakes) and when there are vultures (either kind) over head, fall down.   Or just lie down.   And don’t move until you can *hear* the wings.  Then open your eyes and move.   Slow or fast, either will do.   Speaking to them can be fun.   Not yet, you guys!   Fooled you!  Something of that sort.  Shouting “aten’t dead yet”  in a Granny Weatherwax sort of voice  is fine, too.  The vultures around here are always on the lookout for work, and will swoop low if you’re just sitting still….but lying still brings them right over you.   Depending on the species, the withdrawal of the disappointed undertaker will be flup-flup-flup or “creeeak!” of a turkey vulture’s wing (OK, they ARE more graceful most of the time, merely rearranging a few feathers to begin gaining altitude again. ) 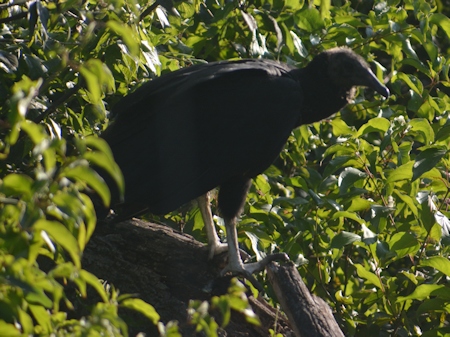 Emerging from a back room, Undertaker asks “May I help you?  Are you dead yet?”  Partner was there but invisible in the leaves 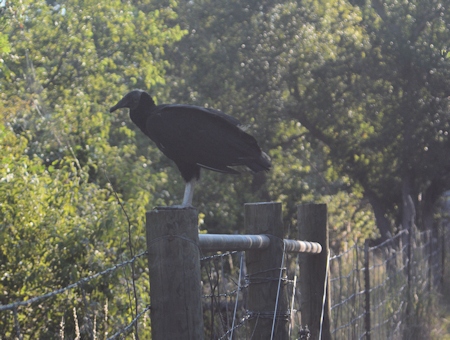 Upon noticing you’re alive, Undertaker moves to a post, preparing to depart. 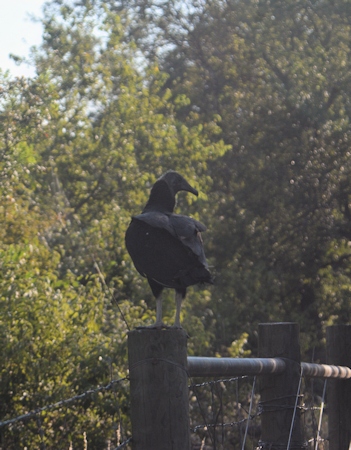 Slightly lifting the wings (not yet spreading them) Undertaker decides to fly away from home since human is Still There.  It’s too bad I needed to approach them from down-sun, so the black/gray contrast doesn’t show very well.  The farther out they stick their heads, the more gray shows.  I’ll try to get a shot of them close enough to show the eyes as well, with better lighting.

These images were taken September 8, on the north fence trail.  The second bird was barely visible still hidden in the bush.   Unpictured is the Turkey Vulture, who noticed the disturbance going on here and swooped down to see if anyone was dead.  Undertakers have a single-minded approach to all situations: did someone die?  Is there work for us?

9 thoughts on “80 Acres: The Undertakers”