NewBook’s new beginning has now been approved by two different first-readers (and many thanks to both of them!!!)  so Chapter 1 is now anchoring one end of the book and the Good Ending (which has no chapter number as yet because things are still fluid in the last third  and I need *uninterrupted* working sessions to be sure everything’s exactly where it should be and properly “attached” at the transitions.  Uninterrupted working sessions mean w/o anyone speaking to me, the phone ringing, etc. for at least two hours, several times a day.  You can laugh now.  My attention span is still not as strong as it used to be pre-2018 concussion–I’m more easily bumped out of the “zone”.    I need to be able to hold whatever string of chapters I’m working on in mind as a whole series–with everything they *should* have–and then look at the real series, spot the problems, and fix them serially, so it feels like the whole thing has grown that way naturally.  This isn’t so hard within 2 chapters, or even 3, but in the longer groups (and every combination needs to be checked) it’s a shaky mental structure.   Ultimately, and when WriterBrain is working at peak capacity, I could hold the entire book in mind while fixing things along the way.  I was better at it before the last two brain shakes.

Leaving in about 10 minutes for the dentist and final (I hope) checkup on the recently infected tooth.  So this is very short but I’ll edit in more when I get back.

Well, that was NOT what I hoped for.  Instead of a quick look at the tooth in question, it was “Oh, no–we’ll be numbing you up again, going back in to flush out the root canal we did, try to get into that other one we couldn’t last time…”  Etc.  Followed by the shots in the jaw, the grinding, the squealing drill, the poking into, more flushing, etc, etc.  NOT what I expected or was really ready for, but then life comes at you when it comes at you.  So they got done, and I was numbed up and a bit shaky (the stuff makes me a bit shaky; I expect they also use some epinephrine to limit bleeding and I produce it for myself when stressed) and luckily R- was with me so he could drive home.   I went in and crawled back in bed, and fortunately got back to sleep until the numb wore off when the pain woke me up in stages.  Having taken a lot of OTC acetaminophen and ibuprofen during the worst of the abscess, I didn’t want to take more unless I had to, and finally, around 4 hours later, it let up some.  It’s now ramping back toward 10 again, but only about 7 right now after a lovely break of about 3.  Three’s easy.   When it got down where I could do it, I went out and hayed the horses, then went out to see where R- was (mowing, the fall mowing.) about 5:30,  which was a nice walk.  It can stop throbbing and pulsing and stabbing any moment now…if it keeps me awake tonight I will take some ibu and acetaminophen.  I need to be working on the book, and concentrating on exactly what’s flowing and what’s not.

In that brief relief period, I was able to be glad that *maybe* this is over, but I won’t be really happy until it’s been comfortable for weeks w/o any major ouch-ness.

AND PICTURES:  First up: the upper near meadow with its row of young bur oaks (partly obscured by a scraggly cedar elm hiding #4 & 5.  Larger trees are live oaks along the Old Ditch.  Block of switchgrass  between (and a lot more up slope to the right & away. 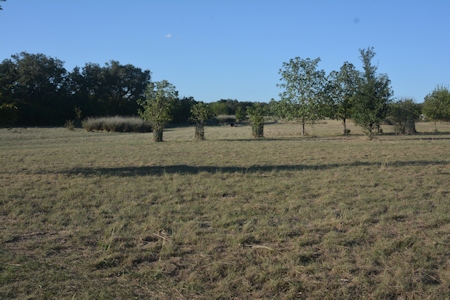 Next: Clearer picture of switchgrass block.  This was self-seeded from switchgrass growing behind the #3 gabion.  Switchgrass is a tallgrass whose height varies with rainfall; in good years the flowering heads can be over 6 feet tall, but in years like this may be just under 5 feet or even lower.  Do not walk into a stand of switchgrass around here in rattlesnake season…this is cover they like and you cannot see the snake before it hits you.  Our rattlers are primarily the big western diamondback species, some of whom are extremely reactive (proddy, in local parlance.) 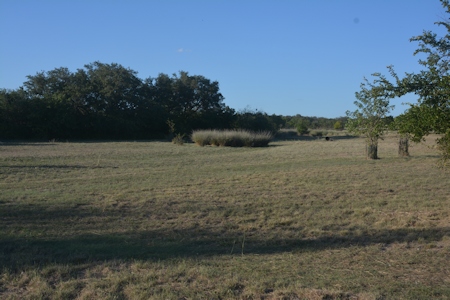 Next: A view from north of the Old Ditch line of trees toward the north, across part of the South Grass to the East Grass (our names for parts of the place to make it easier to talk about to e 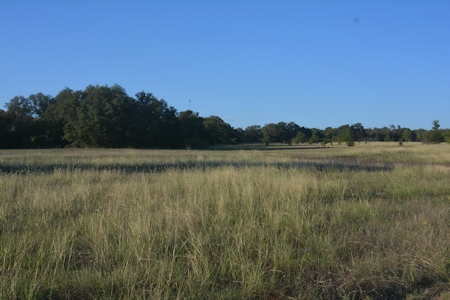 Unmowed near, mowed sections beyond, dark silhouettes are trees in the Dry Woods on the rocky hump and you can see smaller trees (recent, mostly less than 5 years) to the right of the main group.  Some of these will be removed and some allowed to form little clumps for wildlife sanctuary.  The older Dry Woods and need protection from accidental fires and thus we won’t try to extend the woods to the road (not good soil out there for trees anyway.  This was originally prairie with small amounts of wooded cover along creeks, near springs,  and on hillsides that would not support grass.

Next: one of the woody associations we let grow:  deer and other wildlife have used it in winter, there are birds’ nests in it in summer, etc.  However, it originally had five species of trees/shrubs in it, and several have died of drought.  Now it’s mostly bumelia, a thorny small-tree-shrub and no longer has the young pecan, the cedar elm, etc.  Valuable as it is for wildlife cover, it was more valuable across a range of wildlife when it wasn’t mostly one species.  Will probably thin the bumelia and see if we can get some other stuff in there again.  This area, though planted with non-native pasture grass (both King Ranch Bluestem (KRB) and silky bluestem before we bought it, and badly overgrazed, now has a variety of native grasses and forbs as well. 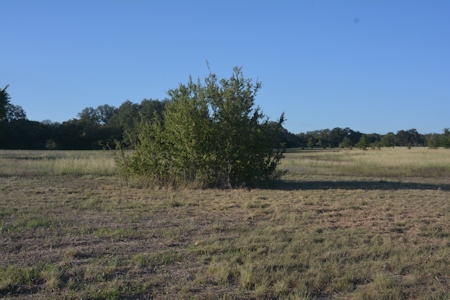 6 thoughts on “New Beginning In”