R-‘s little orange riding mower caught fire while he was mowing in the field today and started a grass fire that resulted in four different rural fire services responding.   It was a tad frantic around here for several hours.

Morning was cooler (and dryer) than yesterday, but it warmed up faster than anticipated, and the little orange mower sits lower than the small green Deere and its mower deck is closer to the engine.   So he was taking down ragweed and broomweed–standard late-season chore around here (our neighbor to the south was mowing with a big tractor and towed mower/shredder)  and…suddenly heard a loud “pop,” the engine died, and flames were coming out below.  They quickly spread to the grass and forbs, and a little breeze sprang up, and soon the field was ablaze, the fire moving quickly to the treeline to the north and the dry woods to the west.

All honor to the fire crews: we still *have* a dry woods, and we think most of the trees on the north fenceline (the highest concentration of live oaks on the place, plus the single post oak) will survive, though with scorched twigs and at least one very unhappy looking limb.

It was quite impressive, and no, I did not get pictures as this was going on, because I was hurrying back and forth…collecting horses from the horse lots and confining them to the barn, so if the firefighters needed another way in I could open the street gate, the lot gates, and let them out into the near meadow,  cutting the fence on the south that was near a street in town, in case they needed to get to that side of the old ditch to protect a neighbor’s house (adjacent to the field) and the construction yard (with a neighbor’s help because I didn’t know where our fence tool was since R- incorporated it in the barn’s tool areas)…he had one and helped me cut and then loop the barbed wire back, going back out to see what, if anything I could do to help.   I called 911, of course, and then when I first went out saw the flames get into the edge of the dry woods and the north fence trees.  Before I could get to a fire truck, or R- who was standing near one (OK, he’s standing, he’s not badly hurt) a line of flames moved up between us and more were sneaking along under cover of tall forbs beside me, I suddenly realized.  .

Late in the afternoon, R- went out to take pictures and found some embers smoking and two with little flames.  He came back, got the other little tractor with a cart and got two 5-gallon wormer buckets full of water from the lily pond, and took that out.   I followed on foot, having retrieved my phone from the charger so I could call the fire dept if I needed to.   Sure enough, he got only some of the coals and embers out completely before he ran out of water, so I called 911 again, explained that we had some smoking embers, and a truck came out and wet down the worst places, then said with no wind expected tonight, and everything that *was* still “hot” being in the middle of a large burnt-over area, we didn’t have to worry about it.   We came in and ate supper, late, because it was getting dark by then.    I awarded myself a Teo gelato soda for the extra walking today because there was a lot.

Photos here taken by R.S. Moon in late afternoon while checking for smoking embers and small additional fires.  First two pictures show unburnt grassland (what it all looked like before the burn with some scorching on trees at the margin(1), and the color of unburnt/scorched trees across the road (2) Last picture shows fire across the N fence and into our neighbor’s place. 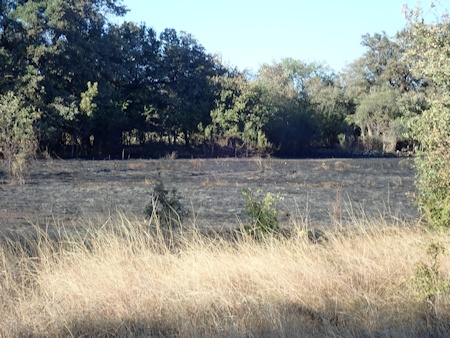 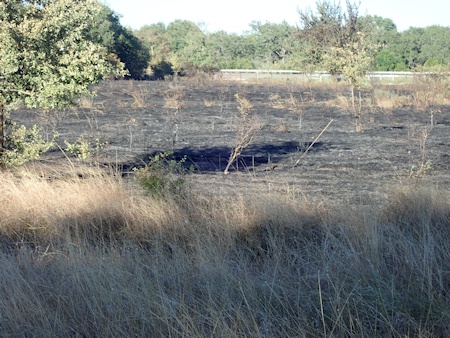 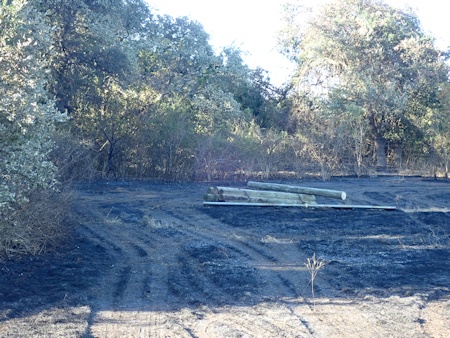 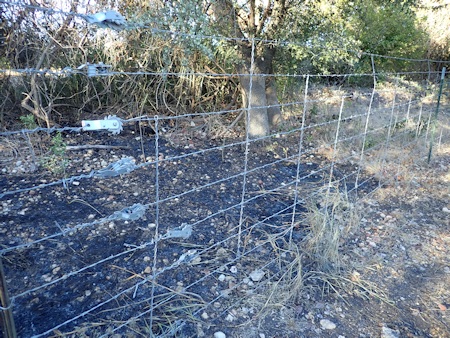