Merry Christmas for those who observe, and if that’s not you, here’s wishing you a joyful and peaceful winter holiday season.

Meanwhile, back at the ranch, the cruel owner who’s been forcing poor Tigger to take his supery dupery joint supplement felt that she could not force her horse to eat something he hated on Christmas Day, so instead of that and a battle at feeding time, he got two Stud Muffins ™ broken into pieces in his feed, and his other supplement.  And went in and started eating eagerly, as expected.  No muss, no fuss, no struggle.

The humans dined al fresco in the back yard, on a brilliantly sunny and pleasant afternoon, on ham with spiced pear & maple-syrup & lime glaze, and boiled potatoes (we LIKE boiled potatoes) with butter, salt & pepper.  We can haz ham & potatoes if we wants, yessir.  Set the outdoor table (constructed by R-) with a proper cloth tablecloth, real plates & flatware & glasses, but did have paper towels for emergency wipes (didn’t need them) .  The cedar waxwings were frustrated by precautions (like setting the table with plates and dishes bottom side up until we were ready to eat) and left us alone, but there were plenty of birds flying around, in and out of the roughleaf dogwood tangle at the upper end of the artificial stream.

And I came in to find that I’d lost the flash card with the book on it, but it was just hiding between a CD and a DVD, so YAY! 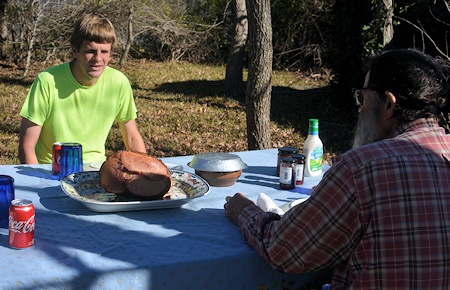 Clearly I need to cut their hair again.  Maybe tomorrow…

6 thoughts on “Holiday for Horses”