In reply to a much, much earlier post, someone happily explained to me that he could “change my life forever” because HE is a professional writer,  and only he has the skills to help me.   He claims a specialty in academic writing.   This is of a class of mail writers receive that assumes if someone is a writer, they’re an amateur incompetent writer who needs the help of an amateur incompetent coach/editor/teacher/etc.   The individual has never read far enough into the blog or website to realize what it’s about (Ghu forbid they look at the information available onsite) and usually makes elementary spelling and/or grammatical errors.  This one did too, although only one, which is better than average.   Though it was tempting to leave his comment and reply with a sober and controlled reply of solid fact…I just labeled it spam and dumped it.

Sad news:  my sweet mare Kallie was put down because of increasingly fast rotation of her coffin bone in the left front.   I knew when I bought her that her hoof problems might prove intractable and it might come to this, but still a heart-wrench.   I don’t regret having bought her, and made the attempt; much of the time she was pain-free (I even rode her some, at a walk)  and she liked being here, though confinement really bothered her.  A couple of pictures of Kali when she was feeling well.  First, begging another horse cookie in late November.  Then, riding her in patterns, in late April.  In the second picture she’s wearing a protective boot on the left front, with bandaging underneath. 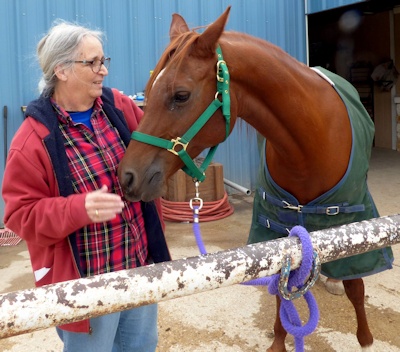 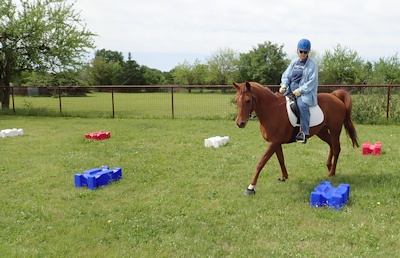 Happier news: I may have found a new horse (up in north Texas again), bred and brought up in Texas*, who’s sound and steady on trails.  He’s a 13 yo grey gelding.  If he passes the vet exam, and if he passes my “Do you want to be my horse?” exam, I’ll get him sometime in June probably.  He’s had some hard times in his life, but most of it wasn’t that bad, and he’s supposed to have a gentle and willing attitude, but still have the big fast walk of an Arabian.   He’s the old-style Arabian, very different body type from Kallie,  with a lot of his bloodline out of Ralvon Stud in Australia–his double grandsire is Ralvon Elijah.  .  A “three circle” horse, perfectly balanced, with a short strong back, good hindquarter (which Kallie, poor girl, didn’t have), good underline, and good shoulder angles.  EDIT:  This is a mistake…I found another (earlier??) website for a stud with the same name as his breeder’s, near Waco, Texas, but presently at least (and maybe at first?) they’re in south central Oklahoma.  I didn’t notice this at first; I was looking for pictures of his sire.

I’m working on an essay for Nightshade for an anniversary re-issue of Moon Flights as a trade paperback, with a hard deadline of the end of this month–the final stuff with Kallie knocked me off balance for awhile, and I’m also hosting, today (in bad weather, grr) a memorial gathering for a friend who died in February.   And tomorrow I’m singing Bach, Mozart, and Durande, which is all beautiful (and not easy!!) music.   After that I should be back at work on the horse mystery, going to see “Prestige” (that really is part of his name), and if that works out, riding him daily.  In the meantime, I’ve committed to riding 3x week with my trainer to maintain and improve my skills and riding fitness, which are improving s…l…o…w…l…y.   I really hope Prestige works out; I would much rather do the rest of my rehab to riding on an Arabian of my own than a school horse, however cooperative.  (He doesn’t appear to have a barn nickname.  I think I’ll give him one.   Calling “Prestige!” down the pasture is…not exactly my style.)  Here’s a link to Vanguard Arabians, his breeder–no picture of him, but one of his sire Cavu Paragon, and of other horses much his shape.  http://www.vanguardarabiansporthorses.com/

We’ve continued to have unusual rainfall since last September–good for the grass, but tough for the land managers to keep trails open, get the last of the fence built, and so on.  R- and I do not want a drought, but would like long enough between big rains for the ground to dry enough to get around with heavy stuff like rolls of wire and the big tractor for shredding the really tall stuff that will be a fire hazard as soon as it IS hot and dry.

We hosted a memorial gathering today for Carrie Richerson, who died several months ago.  An extraordinary short story writer, not wildly prolific, but with a faultless sense of timing …everything she wrote as perfectly shaped and faceted as the best jewelry.   As a writer friend, she gave careful, precise critiques when asked for, time after time pointing out the exact place a story was drifting, or losing focus.  Her friends from the SF community in Austin came up to our place to celebrate her life, where her ashes will be laid to rest.  So we remembered her, and told Carrie stories about her, and another friend read one of Carrie’s stories, and we walked out on the land because the rain stopped and the sun came out and the wildflowers she loved and the birds she loved to hear were all out, all beautiful.   And we ate barbecue–brisket and sausage–and beans cooked with smoked ham hocks and onions and garlic, food she’d also enjoyed, and potato salad and so on and on (more food than people), and talked and talked and talked.

That what’s where things are, on this stormy Saturday in May.  And now to bed because 6 am comes fast and hard on Sunday mornings when I’m singing both services.  Which I very much hope to do, in part to celebrate Carrie’s life because she also loved serious music and tomorrow is Bach and Mozart and Durante.

5 thoughts on “Mail Writers Get, Sad & Happier News, and Other Bits & Pieces”