Kallie arrived the Thursday before Christmas and we actually got two rides in before the weather closed in again…one on the Saturday before Christmas and one the morning of Christmas Eve.   No pictures of that, but I thoroughly enjoyed both.  The picture of me riding was the last ride at Forward Motion, where she rehabbed and was boarded.   She did very well here in the new place.  Christmas Day, I was too wiped out by both riding on Christmas Eve and then singing the late service and driving home…I fed her and did her chores, but also took multiple naps.   The next day it rained (a lot) and that night we had a walloping big storm…I sat out a lot of it in the barn with Kallie who was not thrilled…in fact ran out into the storm just in time to be hailed on.   I finally talked her back into the barn (she wouldn’t let me get a halter or rope on her)  and held her there by voice reassurance for an hour or so until I realized that the cold mist blowing into the barn on one side had gotten me wet enough to be going hypothermic and I had to go inside and warm up.  Kallie had a rain sheet on, of course, so most of her wasn’t wet by then.

L to R, first row: That’s her head in the trailer.    And she liked buffalograss the moment she was out..  And the little winter forbs growing in it.
Second row.  Last ride at Trainer’s; we were coming through a down transition.  And going after the grass in the small barn lot. 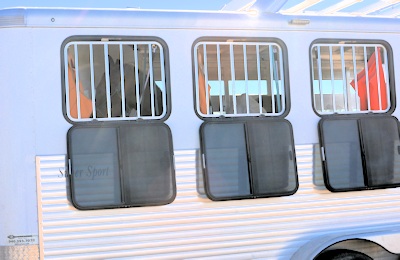 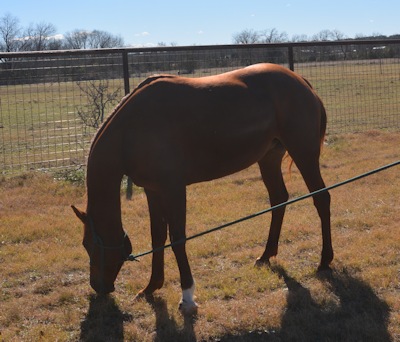 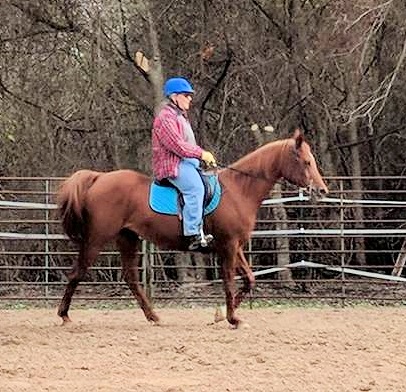 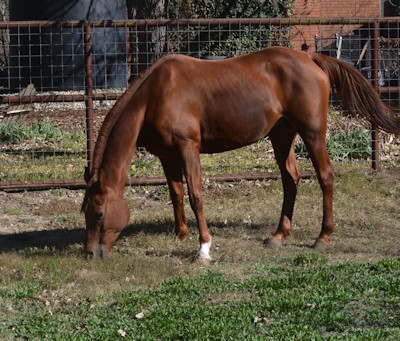 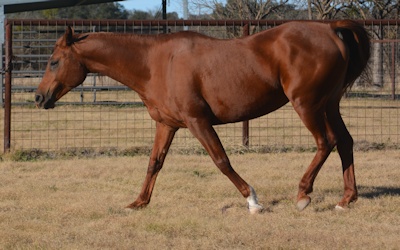 Last picture: walking with purpose out in the 1 acre horse lot; she’s spotted something she wants to eat.

The ground has been too wet to ride on since then and we’re expecting more rain, but this being Texas, at some point we’ll dive straight into the next drought.  Meantime, we want the grass to grow and that means limiting her time on it.    I’ve hand walked her out to graze a little on the firmest ground I could find.  The bottom end of the horse lot still has water on the surface.  She would prefer to be out in the larger (1 acre) lot, which she enjoyed the first few days, but does not seem to be missing the other horses.  She has access to both stalls in the barn, the open loafing area, and the south barn lot (40 x 30 feet), which adjoins the barn and the back yard with a partial view of the front.  For entertainment she  has the neighbor’s goats on one side to the south, and the other neighbor’s cattle to the west, and a view north to the 80 acres, and the occasional glimpse of Blaze WonderStud in the extreme distance to the south west, beyond the cattle and another fence.  Unlike Molly, she does not spend her time trotting the fence and calling to him, though she has made a definite fence-track. She can also see out the barn aisle to the east, and a different part of the back yard.   She’s alert and interested in everything.  When she was out in the larger space, she spent her time grazing or walking over to something else interesting.

She has hay in the “extra” stall, and her bedding (shavings) and her manger for hard feed in “her” stall.  She does NOT want to be shut into the stall.  Mostly she’s not but today she had to be in it for maybe 10-15 minutes and she had a bit of a hissy fit about it.   She did not take to the range block (salt and mineral) that I had in place for both Mocha and Molly, so she’s now got a pure salt block in another manger hanging on the open door of the extra stall.   Her new hard ration (Purina Strategy pellets)  has more minerals so maybe that’s why she is working that salt block with her tongue several times a day.  She’s been  on that since at least November 1…Trainer tried a couple of feed combinations on her and decided Strategy plus a liquid supplement called C0Med worked best.  She gets the supplement in her morning feed.  Then a small amount at noon to bring her total of hard feed up a little, another large scoop for the evening main feed, and a night snack of carrots and one Stud Muffin cookie.    Moving from stall to stall, from inside to outside, from one view of the world to another, is giving her light exercise, though it’s not “enough” in the long run…but she’s not stocking up, so it’s doing good.

Meanwhile I’m getting back in the rhythm of horse care with a horse that’s rewarding just to be around.  And I finally got a pony “for Christmas.”   On the writing side,  the re-issues of the Paksenarrion books are coming out, Into the Fire went back for another printing in the UK, and the  equestrian center mystery is slowly moving along, hindered (!) by having Kallie here for me to play with.   Also by hand pain when writing, including online.  My right thumb wishes everyone to know it’s not fair it’s had to contribute to mousing AND do all the scut-work of hitting the space bar.   I started knitting again on the pair of socks that had been on hold for months, and have now learned to *darn* socks by other means than staring and a hole and saying “Darn it!  Rotten sock!”