Thanksgiving is about to happen again.   There’s a table you can’t see behind the people on the right of the picture below.    This year both tables will be almost full; I’m expecting 17 or 18.   Therefore we will be, from yesterday when it started, preparing for Thanksgiving.  Turkeys and ham are in-house now.   More groceries will be fetched tomorrow (and Monday.)   And therefore I will not be sharing any new news on the new book because there won’t be any new news because I will be chopping, dicing, slicing, sauteeing, mixing, and otherwise prepping components. 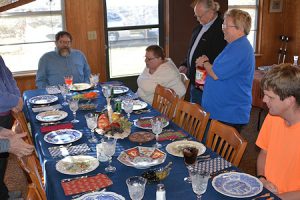 In order to be sure that we don’t run short of anything (everyone can have as many servings as they like of everything) there’s massive overproduction.  Followed by a day of frantic packaging of leftovers from fridge to freezer storage.

The menu has grown over the years from the days when two couples were quite happy with turkey, dressing, gravy, and pumpkin pie.  Then we had children.  Then my mother got involved (she had the house with the room big enough…) And then the others.   Dishes were added as people offered to bring them, or subtracted if 90% was left at the end of a meal.

Turkey, dressing, gravy, ham with spiced pear glaze,  sauteed sweet potatoes with apples, green bean casserole,  spinach and mushroom casserole,  corn with onions, peppers, tomatoes,  big green salad, homemade (by someone else) cranberry sauce (two kinds, with and without pecans),  and various pre-dinner nibbles: celery and carrot sticks, olives (black and green), pickles.   And desserts, which start with pecan pies (plain and buttermilk-raisin) and pumpkin pies, and include a range of others.  This year we’ve been promised an apple torte.   There may be a chocolate fudge pie. 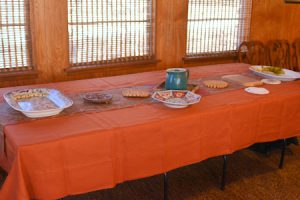 In a year when fewer people show up, like the year these pictures were taken, the second table is used as a buffet layout for the meal.  Desserts go on the washer-dryer, just off the dining room.

Anyway, I’m going to be very busy, not least because singing two services Sunday morning is between now and then.

7 thoughts on “Notice of Absence”