I was walking back to the house today when I heard a sort of scuffling noise that seemed to be coming from the carport.   It didn’t sound like an ordinary cat-noise, but I thought one of the idiot younglings might have gotten up in the engine compartment and then stuck there.  Or even (not a happy thought) in the interior of the car.   No cat, adult or middler,  was in the car, under the car, or responded when I thumped the roof.  But something scuffled somewhere.   I followed the noise and began to hear watery noises.  Water?  It hasn’t rained for weeks (and weeks.)  Little splashes and scuffles….and then I realized something alive was in the washout pipe of the rainwater collection system. 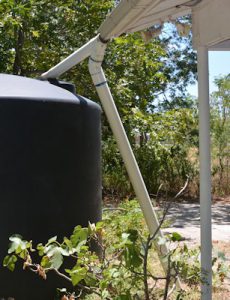 We collect rainwater from the roofs (house, barn, carport…and out on the land, from the roofs of the three purpose-built rain barns) and use it in wildlife waterers, also purpose-built.  And (the barn tanks) to water the horse.  The black monster is a 2500 gallon storage tank–water comes down the roof to the gutter, down the gutter to that pipe slanting away to the left, and thence into the tank through a protected opening (heavy mesh, then thinner mesh to keep out mosquitoes, with rocks on top to hold the mesh down.)  The pipe that slants steeply to the right is the washout pipe.  The first water off the roof is very dirty (dust, ashes, bird poop, leaves, twigs, feathers…) and at least some of the mess goes into the washout pipe, which can be emptied later.

But something ran along the gutter and then into the pipe.  So the pipe was lowered, slowly and carefully, so the water would run out of the washout pipe, and when most of it was out, out came a beslimed and soaking wet squirrel-sized animal, its fur plastered to it, and very, very glad to get out of a hot pipe with dirty water in it.  We were prepared to help…but no.   Ears flat, it fled across the drive into the bushes.

To the writer mind–in addition to the interesting details of getting a (probable) squirrel out of a pipe without getting bitten (there’s a story behind that thought)–this presents new possibilities for characters in difficulty.  How would you get out of a much larger version of a smooth PVC-or-something-similar pipe?   What if it was this big?  What big?  (As in calculus books, I leave this as an exercise for the reader…and just barely refrain from saying the solution is intuitively obvious.)   A cascade of questions–of research ideas–went racing through my head…but they’re not pertinent to the book presently being written.  At least not yet.  It’s not half done yet.

I’m really glad I heard that critter scrabbling away in the pipe.   I wish I’d been smart enough to grab the camera and take pictures as the water was pouring out.  Then again–would’ve been unfair to the squirrel (or whatever) to show it as it looked.