Went out yesterday to take pictures, and…didn’t look to be sure the SD card was in the camera.  “Took” a lot of pictures, none of them on the card.  So today, reprise of that, but the little frogs in the Fox waterhole didn’t show up.  SIGH.   Good day for pictures, though.

Live oaks put out both leaf and catkin (floral parts) in their recovery.  They don’t normally drop leaves in the fall, at all, but in early spring, with the leaves and catkins coming out together.  They had, so to speak, buds pre-allocated to the both types of new growth.

The post oak normally drops its leaves in late fall, like most oaks, and produces catkins in the spring.  Post oaks supposedly produce more flowers at the top of the tree…but nearly all the sprouts coming out of the damaged post oak are catkins, not leaves.   My guess (unconfirmed by anything I’ve read so far) is that the stress of a partial burn pushed it into reproductive overdrive this fall/winter. 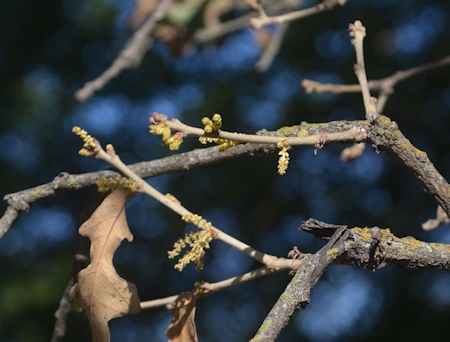 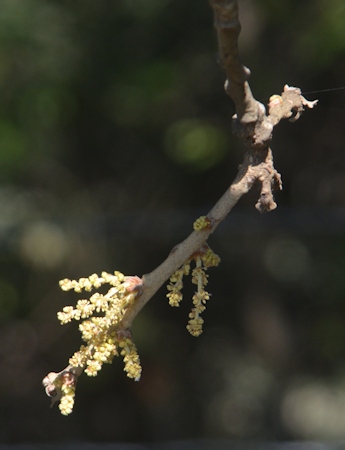 It didn’t produce acorns this year (the hard freeze just as oaks were budding out) and I see these as “Next year’s acorns that can’t make it.”  We’ll see.   I would very much like to get a few post oaks growing on our place.

We’ve seen a few bluebonnet sprouts this past week, but they’re not photogenic yet…the little leaves haven’t opened up enough to show the typical bluebonnet leaf shape yet.  Otherwise the burn scar is looking generally greener, though there are still blankish patches.  R- is taking about half a garden cart full of the more aged horse manure up there almost every day, and just tossing it out (not quite randomly).   We have two manure piles, and the currently active one will become the “aged” one in about six months.   I’m noticing more insects on the ground (the various “black beetles” that seem to vary some without being easily identified.)

Up on the “hump” that’s the highest spot on our land, we wish we could clarify the geology…because there are some fascinating and slightly mysterious oddities.  Take the dry woods swale, which fills up *after* (from one to three days after) serious rain, with the best water on the place: clearly it’s gone through some rock to get there.  That’s on the south side (sorta south…these are not compass readings…) and when the field was terraced (way way back, not by us) a terrace berm kept water there from draining to the south except where cattle broke down the berm at one end (so it ran down the cattle trail.)    The Bowl, part of the east grass, is “seepy” in wet years…but there, the berms run into the dry woods, not along one side of it.  Somewhat odder, the highest area of the dry woods has a moist area that supports large sedges, some larger old oaks, Mexican buckeye…and more wet-loving grasses.  I’m thinking a perched aquifer–small, not that deep, but underlain by impervious rocks. 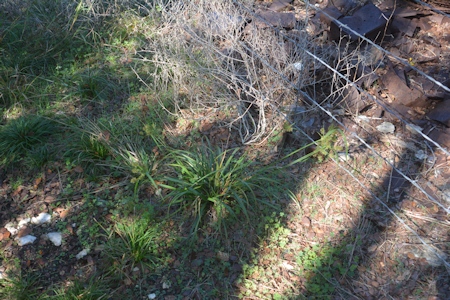 Just west of Fox Pavilion, the little “platform” the rain barn is on drops down and has this patch of (native farther west but planted in anticipation of climate change) Black Dalea*, a legume that flowers in the fall or winter (rainfall dependent.)   It’s lovely when it does, and it’s swarmed by pollinators including bees (native and honeybees), flies, and small butterflies.  Today most of the insects were native bees, beeflies, flower-flies (all pollinators.) 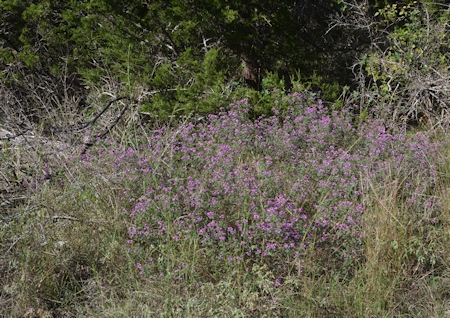 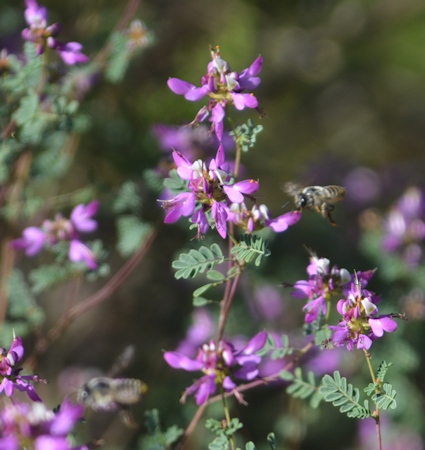 The official TPWD wildlife management  form we fill out yearly for the County Tax Appraisal District has a section in which you’re supposed to guesstimate how many “standing snags” you have per acre.  Standing snags are habitat and food resource for a variety of native wildlife–birds may nest in them (and if they’re big enough, squirrels and raccoons may also nest in them), insects may burrow into them as well.  And they’re a favorite perch for some birds, especially vultures who are tired of living crowded onto the local cellphone tower.  The tower provides a much higher perch, and makes for easier takeoffs, but it’s otherwise artificial and noisy (all those humans working under/around it).   Dead trees are Tradition, and the Undertakers are nothing if not Traditional.  (I haven’t been able to get good pictures of them on the Dry Woods snags, because they see me coming.)  We have a lot of snags, and here are some. 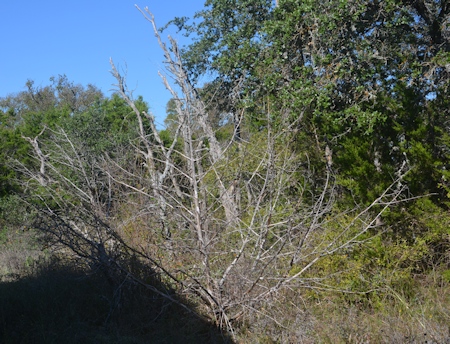 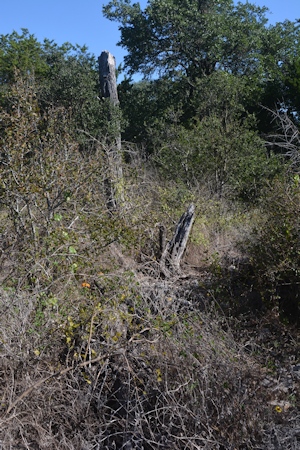 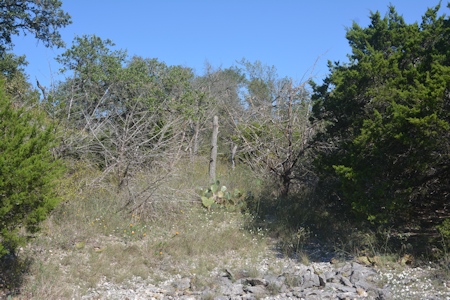 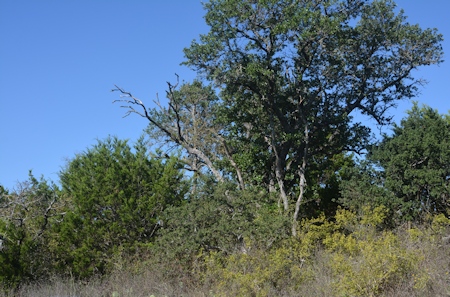