What you’re told, in the management books, is that after a planned fire, everything comes back just fine.  Wild fires tend to be hotter, get out of control faster, and do more damage because they occur in the hottest weather when fire departments hope to goodness no fires start.   There are enthusiasts for “prescribed fires.”  There are no enthusiasts for unprescribed burns.  I’m not an enthusiast for either, in today’s heating world, but Stuff Happens.  It’s always caused, usually by human error of some kind.

We have been lucky to have two rains (one about two inches last week, about a week after the fire, and one about four tenths of an inch last night.)   Between the fire and the first of those rains we walked the entire fire scar and ordered seed to assist recovery.   The seed came in and this is what it looked like: 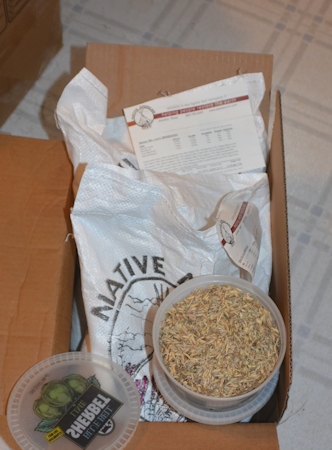 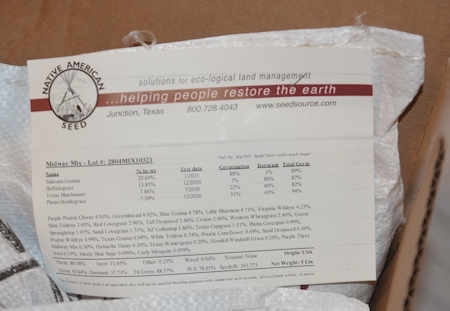 Two sacks of seed in a box, and seed in one of the sherbet containers we first carried out to the burn scar (light on the way out, even lighter on the way in.)   And the content list for the seeds…that’s a lot of species, but that’s what prairies are, a mix of many species, each finding its own favorite habitat within the land.  Later we decided to carry the seed out in larger containers,  Strongid ™ horse wormer tubs.   (Strongid used to come in VERY useful 5 gallon buckets, but I admit these are easier to use for sowing seed.  I also use them to store sacks of beans and pasta.  But they’re not nearly as good as 5 gallon buckets for sitting on (too low), or carrying tools in the garden cart, or using for mounting blocks or storing 25 pounds of flour .) 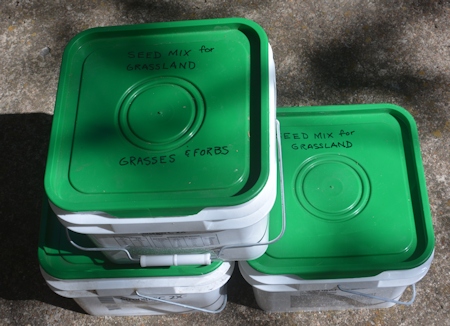 But the grass seeds in this mix won’t germinate in fall, only in spring/summer so only the forbs matter now.  Meanwhile what really matters is the seedstock *in* the soil, and the root depth of the perennial grasses there when the fire burned their tops off, and the remaining leaves and rootlets of the trees that aren’t killed outright.  We had nothing to do with those but hope, because we had no way to water them except rainfall.  The trees and shrubs turned various dead brown and gray shades, where they weren’t black.  Some still had green at the very top, or on the far side, but they looked bad.

By today, it was clear that a lot of the grass was still alive, and so were some of the forbs (I didn’t take a picture of the tiny forb cotyledons, the first pair of leaves that come out of the seed, because I was busy planting and as I got tireder my hands got shakier.

Here’s one view of the existing grasses.  The coverage isn’t even and there are still large bare patches, but overall the field looks green….ish.  Bright greenish.  98% of the green is grass sprouts, some already four inches tall, and each coming out of the burned crown (and using the roots) of a former clump of grass.  They’re not all alike.  In the distance the yellowish green is broomweed (undesirable, on the whole) which didn’t get burned, and which “poisons” the grass that tries to grow under it.  It smells like citronella.  The blacker the ground, the hotter the fire was right there.  The forbs are just starting to poke through.  The forb seeds we planted today should sprout after the rain that’s due the rest of the week. 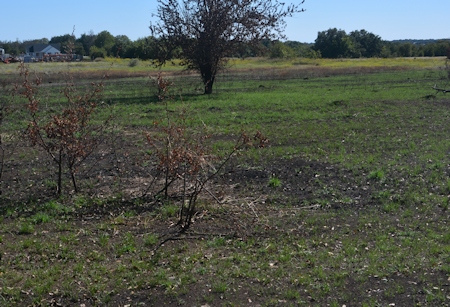 But what about the trees, those grand old Live Oaks and one Post Oak just over the north boundary fence?   Slower to bounce back than the perennial grasses, the oaks took their own sweet time pushing nutrients  and water up from the ground and out to their limbs.   Some buds were burnt, many twigs were scorched, along with the deadleaves.  But…. 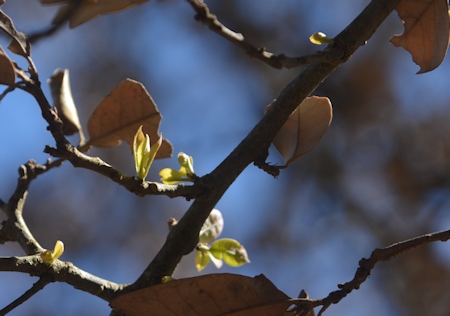 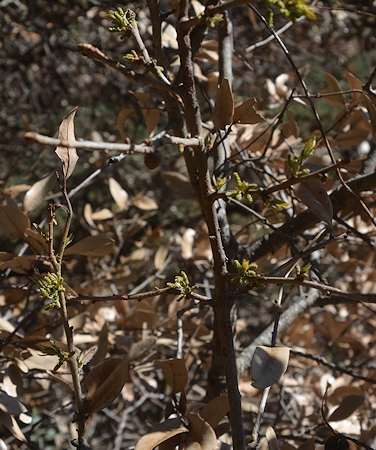 And this…because live oaks drop leaves in late winter/spring (depending on individuals & weather) and then bloom…this last young oak is putting out florets that will allow it to spread its pollen on the wind, as Oaks do, and have offspring.  So *there*, fire, says the young oak.  Ha.  I am an Oak; I live centuries, you live but a short time…New buds, from new sites on twigs, bundles of leaves folded tight and floral parts about to expand.  The ground under the oaks is covered with the tan leaves killed by the fire, more dropping with every wind, but “Aten’t Dead Yet.”

One may be dying (no sign of green yet from it) and another is grievously scorched, but I’m grateful for their toughness as well as their shade and the habitat they provide for other creatures.

8 thoughts on “Recovery In Progress”