Ten days after the fire, and two days since any rain–but the 1.75 (approx) inches had a wonderful effect and revealed that for some of the burnt areas, the burn didn’t go below the surface. 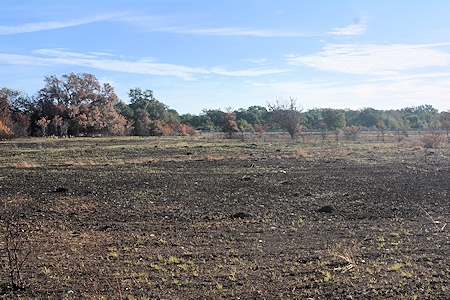 Some areas are still all black, but some have little green sprouts of grass from every scorched clump-remainder.  One spot (in the shade of the oaks) has a cluster of tiny dicots coming up.  The neighbor’s hayfield  shows that only the stubble burned; that grass too is coming up.   I scratched a few twigs (oak, western soapberry) with my thumbnail to see if the under-layer of bark was live, and it was, though the leaves were toast brown and many had fallen.  Saw the first wildlife tracks on the burn scar: deer, a big one.

Here’s the big oak in the dry woods (where dry woods meet east grass).   Easy to see which limbs are damaged by the color.   Of the other species of woody plant damaged by the fire, some are more orange, and there are different shades of brown.  None of the colors are fall change: everything not green is fire damage, except the pale grass (KRB, Silver Bluestem, Silky Bluestem, and some shortgrasses like curly mesquite, buffalo, Texas grama. 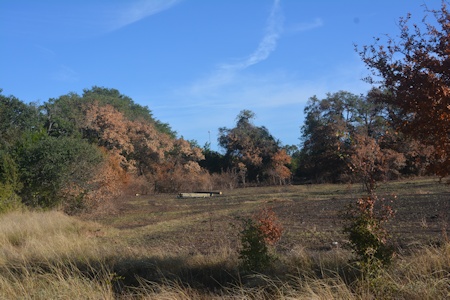 From a different direction…looking back up from the gate to the highway: 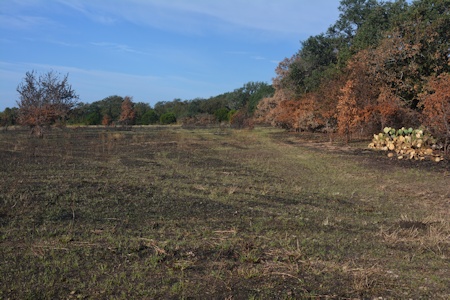 And here, the worst-burned cactus patch, looking like a pile of crumpled paper bags, but will probably come back since prickly pears are very, VERY tough plants. 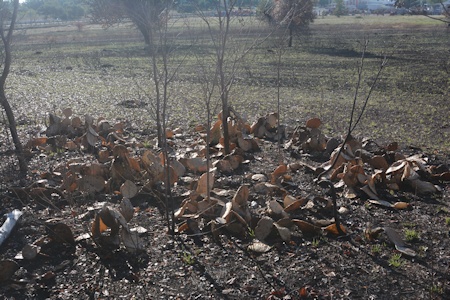 Elsewhere on the place…on the farside of the “hump” on which the dry woods rests, this is the trail from the View Corner south to Fox Pavilion.  I walked down it this morning to check the water level in the wildlife guzzler.   So glad none of this burned. 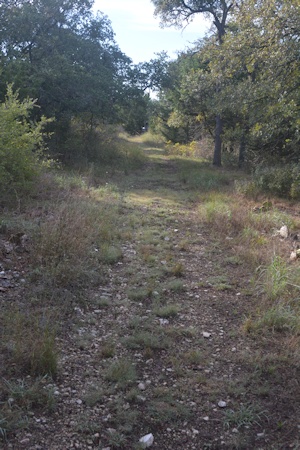 Three wildlife thrills today.  Walking on down the north fence trail after checking the water at Fox.  I was striding along, watching for snakes as usual, and looked up to see, down the trail, a coyote loping toward me.  No, I wasn’t quick enough to grab the camera, because Mr. (or Ms) Coyote, upon seeing me, did a U turn and loped quickly away and out of sight.  Not a terrified run, but a seasoned, adult, experienced coyote’s gait.   Dignified, even.   I’d seen the tracks of an adult coyote up by the View Corner, so I wondered if this one was coming back up, perhaps to drink at Fox.

Next, when I got to the Blue Chairs we put under a particular oak, not far from the creek, I sat down for a few minutes and a small roundish bird flew into the oak limb in sight and started snatching the small insects I could see flitting around.   I’m pretty sure, on the basis of shape, its one vocalization, and a hint of a wing bar (it was against the sun much of the time) that it was a kinglet, but I’m not enough of an expert (and my eyesight isn’t good enough) to swear to it.  It had the kinglet size and shape, lacked the stronger markings on the head of the Golden-Crowned, so I’m thinking Ruby-Crowned.  I’d have needed binoculars to be sure.

And on the way back I spooked a small falcon from a tree on the south fence trail (I was coming up the Diagonal trail to Center Walk trail, apparently heading its direction until I turned east.east-by then it had landed on a tree in my south neighbor’s pasture west of ours.   Probably an American Kestrel, but too far away to see for sure.   We get them in winter, and sometimes Merlins and usually a Peregrine or two.  Once, after a storm that pushed birds west to east, we had a Prairie Falcon.

But also…grass and fall flowers, the two purples (Eryngo and Liatris) and the three yellows (Broomweed, Goldenrod, and Maximilian Sunflower).    Indiangrass, Little Bluestem (the natives) and King Ranch Bluestem (the invasive and often planted pasture grass.)  All beautiful in fall. 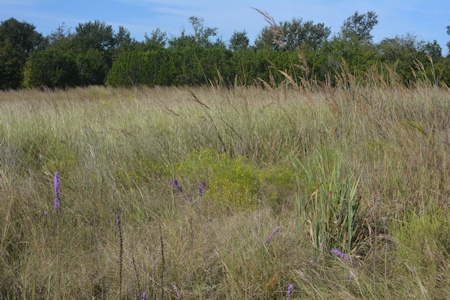 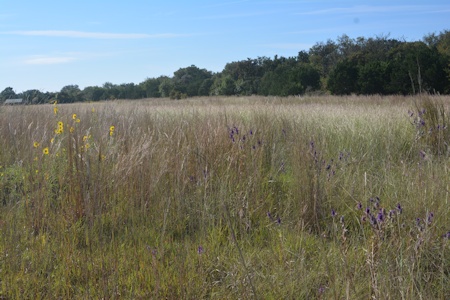 Higher view…several Eryngo plants, Little Bluesteam nearby (brownish and darker green, then a stripe of King Ranch Bluestem, pale, with another stripe of brown heads of Little Bluestem behond them all the way to the trees of the creek woods.  The yellow “sunflower” is the Maximilian Sunflower, each plant a tall stalk with multiple flowers up and down the stem.

A solo clump of Maximilian Sunflower in the west grass:  on damp ground all year, they can reach more than ten feet tall.   In this wetter than usual year, these plants moved upslope; in some places, the damper upslope side of a terrace berm formed a line of Maximilian sunflowers.  When we bought the field, there was no little bluestem, Indiangrass, or Maximilian sunflower this far upslope, but the natives have regained ground over the two decades. 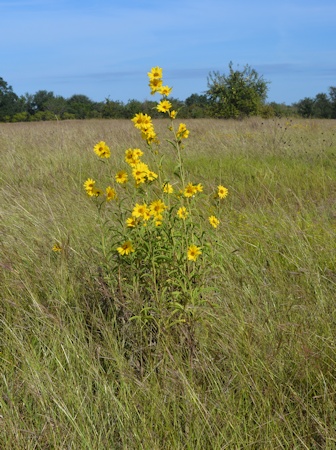 And that’s all for now.