This is a grass that either hasn’t been here before or we just didn’t notice it and get it keyed out.  It really took off in this wet year.   It’s in both the East Grass, up near the top of the Near Meadow, and across the creek in the area never cropped that we know of.   I walked over there this morning (8/20) and took some pictures of it and of the gully system.   The gully system, when I first saw it, was a barren, sunbacked gulch, broken down here and there by cattle crossing it.  That was in August of 2000.

Now it looks like this in a wet year: 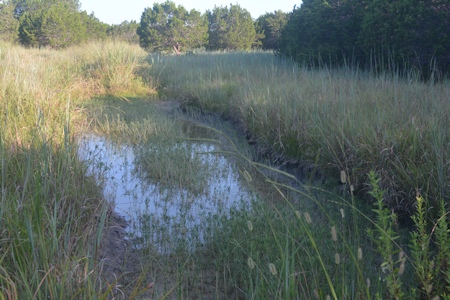 It drains from the north, where the land’s a little higher across the north fence, and if the creek jumps its banks at the first turn, it picks up creek water in a flash flood; it runs into the creek down this way and off to the right.   The blue-gray, upright grass on the right bank is Little Bluestem.  The big, bushy, fluffy-topped grass upstream is Switchgrass (in a good year…not that tall in a dry year.)  Grass infiltration has converted the almost straight gulch to a series of pools (was another behind me at this point, and more upstream that the Switchgrass is hiding.)  The sort of thumb-shaped seedheads in the foreground are Knotroot Bristlegrass.   The gulch is gradually widening and filling now by natural processes.  Great habitat for odonates, crayfish, and when it’s rained enough, fish (but they can’t get back to the creek thanks to the grass and other vegetation forming “dams.”  Water for birds and other wildlife, too.  Switchgrass is stabilizing the banks bit by bit.  We planted the first switchgrass at the upper end, and then threw seeds of it and BrushyBluestem (not as evident this year; I think the freeze may have knocked it back.) 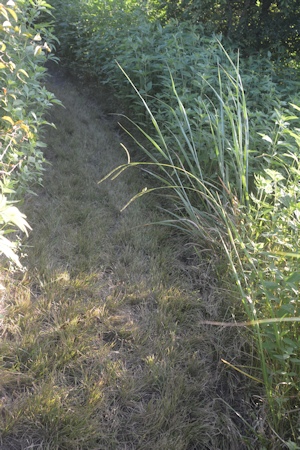 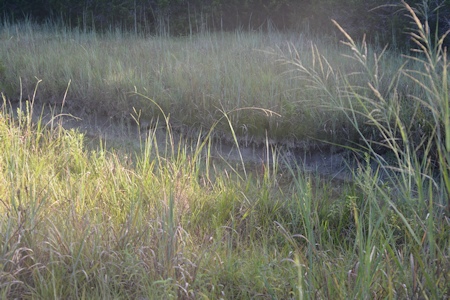 The new grass, Paspalum floridanum, is a big stout grass, though not as big as either Big Bluestem or Switchgrass.  In the left picture, it’s growing in the creek floodplain along with Giant Ragweed.  (The Giant Ragweed is considerably taller than I am!)  Notice the seedheads with the seeds lined up like beads on a shoelace.  Most Paspalums have that seed arrangement, in different sizes.  We have several other Paspalums.  In the right picture, it’s growing on the lip of the gully system, along with Little Bluesteam and (right side of image) Switchgrass.  Across the gulch it’s mostly Little Bluesteam, and behind me, a little higher, it’s also Little Bluestem.  But the Paspalum floridanum takes advantage of any site with more water, so  there’s some in a dip near what we call Fort Cedar.    This part of the land also has much of our Indiangrass which is just starting to put up its gold-bladed spears.  When it’s dry, we’ve seen coyotes sprawled out resting in the gulch.  This morning I saw the telltale “wobble” of water above a crawfish trying to get out of sight, and the arrow-like streak of a frantic fish hoping to find deeper water.   Near this spot was a burrow below an Ash Juniper.   And I forgot to show the buttonbush that was blooming downstream a ways.  Another time.

On the way back to the house, walking by the west side of the Dry Woods, I spooked a largish solid black bird out of the trees.  I think it was bigger than a crow and thus possibly a raven…it didn’t quit look like a Black  Vulture, or fly like one either.

4 thoughts on “80-Acres: Another New Species”