Because I have other snug deadlines coming up, I decided to post about soup (the soup on the stove at the moment) instead.    This is another of this winter’s mix of dry beans and vegetables with some kind of meat (it’s varied, from October until now, mostly some kind of pork–a ham bone, scraps of ham, pork hocks with or without bone, smoked pork pieces–and beef, tougher cuts.)

The dry beans are a mix that I’ve found we all like when cooked.  They soak at least 5 hours and usually overnight.  I start with a quart of the mix.   The local supermarkets carry pinto beans, small red, red kidney, Great Northern (white),  Navy beans (white), black beans, Anasazi beans (a lovely dark red and white splotched), and black-eyed peas.  I buy one pound bags of each type and mix them all up in a big old pickle jar for storage, then measure out a quart for each batch.  I don’t always use the black-eyed peas.  This particular soup started with a package of boneless smoked pork hocks, 3 pounds, the quart of dry beans soaked (I haven’t measured how much they swell, but they rise out of the soaking water,  so I’m guessing half again to twice as much, depending on the length of soaking), a medium-large onion, half a bunch of celery chopped (maybe 4 cups of leaves and ribs?)  and half a gigantic carrot, diced. With all that in the 12 quart pot, this is what it looked like: 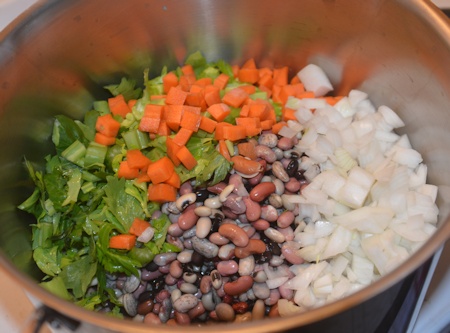 The soaked beans are covering the pork hocks and somewhat mounded in the center (they go in first).   Next comes the Ro-tel, a 28 oz can.  With these four basics in, there’s just about six quarts of “stuff” in the 12 quart pot. 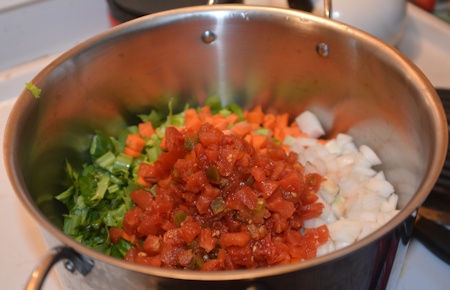 I add some of the seasoning:  whole black peppercorns,  about the same of Savory Spices “Peruvian Chili Lime” blend, “enough” bay leaves (the new jar of bay leaves had tiny ones, so I put in five), homemade stock if I have any left (not right now) or a commercial product if I don’t.   Then I add cold water to just cover everything because I want to keep the soup from being too dilute and having to reduce it (flavor elements that are water soluble can escape in steam.  Flavor elements that are fat-soluble will escape if the soup boils too vigorously.)  Picture below shows my measure of peppercorns for this size soup.  My mother taught me what she learned from her mother and grandmother on how to measure certain things in the hollow of your hand.  This is how many we like; cooking is all about the flavors each person/family likes.  In the background, you can see the celery pieces just barely floating. 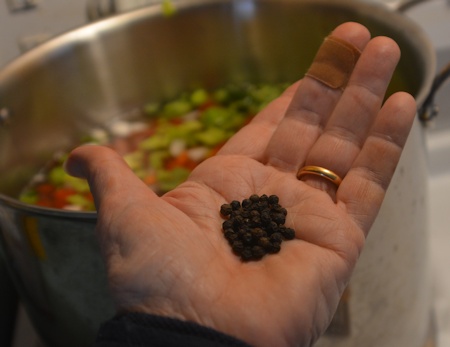 The soup is brought to a boil, then the temp lowered to a guesstimated maintenance simmer (to be checked off and on, and adjusted) and the top goes on.   It gets an hour or two at the simmer, before I taste the broth.  It should have a vegetable-y flavor with a good balance of sweet to “green/sour”…important not to have too much carrot or it will be too sweet, and since this soup will have sweet corn kernels, that would make it worse.  This one was fine.  At about two hours in, I add the (frozen) yellow corn kernels and (frozen) cut green beans, bringing the heat up again, and then stabilizing it in a good simmer.  It’s getting a good stir every 20 minutes or so to ensure that nothing’s sitting on the bottom.  After the corn & beans go in and it’s been stirred, while it’s heating up again from the frozen additions, it looks like this: 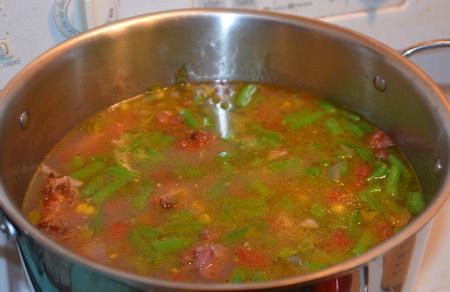 Some of the pork hocks show on the surface, buoyed up by their fat (which I can remove easily now), and the tomato, carrot, celery, and onion can be distinguished by eye, though this picture doesn’t make that clear.  The liquid is thicker than it was to start with, when it was just water, but it’s not nearly as rich as it will be when it’s ready to eat.  The next elements to add will be the mushrooms (once I get them sliced) and the frozen chopped spinach (a pound package.)   An hour after this picture was taken, the broth had thickened a little more, passing the “condensed soup” look.  Thickness, again, is a personal choice.  I like winter soups to be “dense” with the vegetables, beans, and meat in them…every spoonful to have a variety of things in it and a bowl of the soup to be satisfying.  I like summer soups to be lighter, the broth more translucent, the things in the soup more separated.    There are other things that could be added  to this, of course: some people would add squash, or beets, or green peas, and if I had a functional garden now, so might I.  Cabbage is common in winter soups and I used to put it in every soup–until my body decided that it and cabbage were enemies, sometime in my forties.  At any rate, I need to go slice a package of mushrooms now and toss them in.  I may re-open this file and put more pictures in, later in the process.

Picture below is an hour or so (or more?) after the one above, right after I put in the mushrooms and the spinach.  Delays and interruptions had occurred.  Mushrooms aren’t done, spinach is still in clumps, but I got a lot of the hocks more or less cut up (with a spoon…they’re falling apart, which is perfect.  When I come in from feeding horses and doing their water, I’ll check the beans, then add a quart of water and the barley, and 45 minutes after *that*, we should be eating it.  If the beans are done.  Some of the varieties take longer to give up their hard dry insides than others.  Black beans and small red beans are particularly resistant, but the flavor when they *do* get velvety is so good.  You can see that the broth is more opaque.  It’s not the deep rich mouth-filling broth of the second or third day soup, but it’s already better than it was. 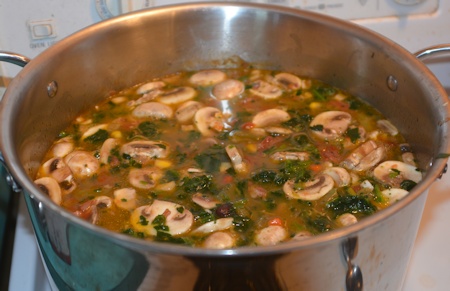