Under today’s clear blue sky after storms in the night, I cleaned Rags up from his rolls in the mud, and (having made pies in the morning and put the pumpkin pie out of the oven to cool)  I got on him and started out with the intent to ride him up the slope to the dry woods, across Cactus Flat, to Fox Pavilion (we built it to harvest rain for a wildlife waterer, its pump circulating water through three stepped pools, and powered by a solar panel.)   Rags was uncertain but he’s a brave little fellow and didn’t throw a fit even when he heard noises in the dry woods as we got closer.  My husband helped when we got to the entrance to the dry woods on the south, by giving us a lead in. Rags was happier when we came out of the first band of trees into Cactus Flat, where wildflowers and cactus and a few grasses dominate on the thin soil.  Cactus Flat tilts up slightly, then there’s a steeper bit, a slab of solid rock, then broken rock above it to the level of Fox Pavilion.  From there a trail winds north almost to the fence, and with a sharp left-right-left turn arrives at what we call the View Corner.   These pictures are in the order of the ride, though they don’t begin to cover the whole distance.   And since I’m not sure how they’ll display, there’ll be some wiggling around as I go in and out of edit and publish mode.

After the last of these pictures were taken, I decided to veer off the path on the west side of the dry woods, and head farther west, down another mowed path, to meet an angled path back south…but Rags had had enough of being someplace he’d never seen before.  My husband was with us, leading the way, but finally Rags just stopped.  He didn’t buck.  He didn’t bolt.  But his whole body was tense, ear stiffly half-back (not pinned), and he made a noise of anxiety, concern, and absolute “This isn’t right, something’s wrong, I do not want to go there.”   I talked to him, tried to reassure him; he wasn’t having any.  Tigger had whinnied for him repeatedly on the way up and the start back…but the thing is, there was thick tall grass on each side of us, and a sunny warming afternoon after a cold snap and a rain are the right time for rattlers not deep under rocks to come back up and out.  I couldn’t see in the grass, and I couldn’t smell one, but maybe he could.  So we went back to the trail along the west side of the dry woods.   Though he hadn’t been on that trail before, he relaxed and walked willingly, ears forward, and then we came to the corner of the dry woods and he relaxed even more.  He knew where he was; he’d been by that corner before, going west down Center Walk, east over to the other route up from the Near Meadow, north up to the Dry Woods and south toward home.  He didn’t try to break to a trot or lope…he just walked happily.

Tigger, meanwhile, had fretted himself into a sweat, trotting and loping back and forth and telling the world that his buddy had been cruelly forced to leave him and go *out of sight* to some no-doubt horrible and dangerous place. 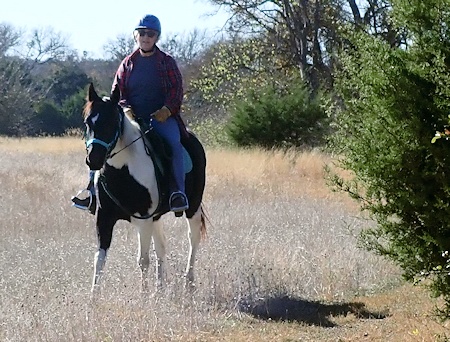 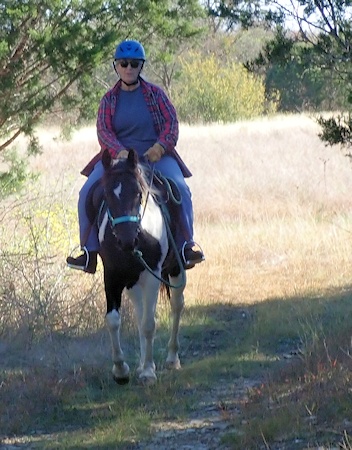 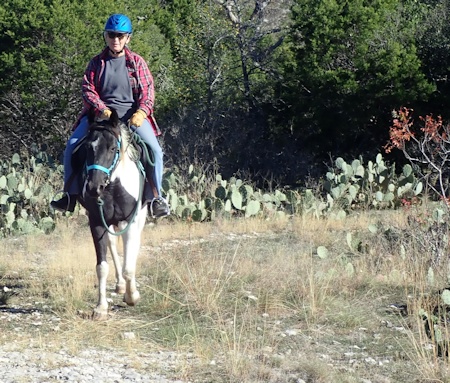 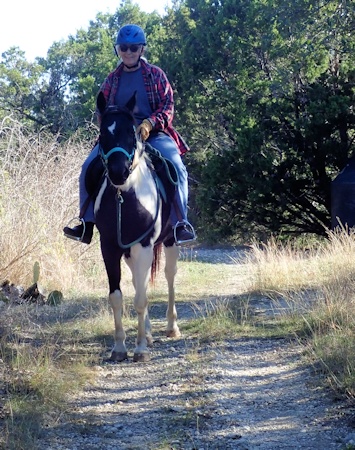 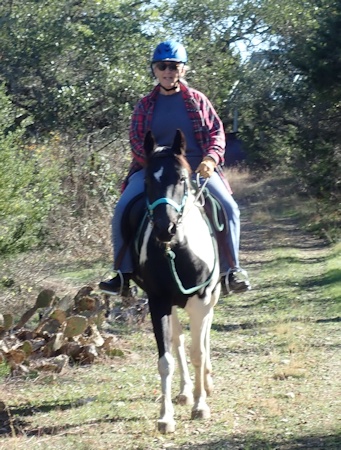 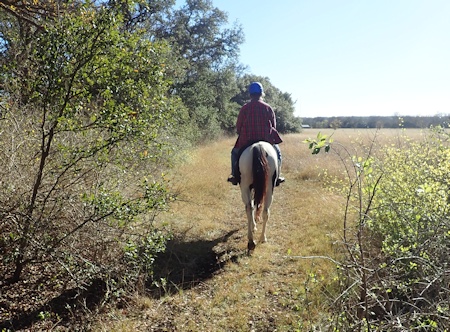