The number of balls in the air varies from day to day.  Basic maintenance (at which I’m not as good as some people)  always includes some cooking, some barn chores, some “land” chores, some business chores (email, mail, etc.) and some writing.   Of the writing some is work on the book, some is work about a book (such as the pronunciation guide for Remnant Population,  or a query about a contract, sent by my agent), some is correspondence, some is (like this) a post to a website.   Adding to this is the need to stay in contact with people I’d normally see at least weekly, and the need to work around the sudden absence of ordinary supplies no longer available.  Like toilet paper and tissues to sneeze into, neither of which we’ve been able to buy for the past three weeks.  Thanks largely to the hoarder contingent, who are still stripping the shelves of some supplies the moment a truck drives in.  But that’s another issue.

The book continues to progress; it’s now at 52, 500+ words.  Slow, and beginning to want me to work faster, but the other things I’m doing again after a longish break from them (like more cooking of more quantity which requires more chopping and mixing)  are making the arthritic hand joints act up.  It’s true spring/early summer now here, with gorgeous wildflowers and green grass,  still iffy weather, but I’ve been out photographing (documenting) things on the land, and getting exercises almost every day (every day it’s not thundering and raining.)    Here’s a Luna moth that came wandering by late last week, down in the grass SW of the dry woods.  It was early evening and the shadows were moving across it really fast. 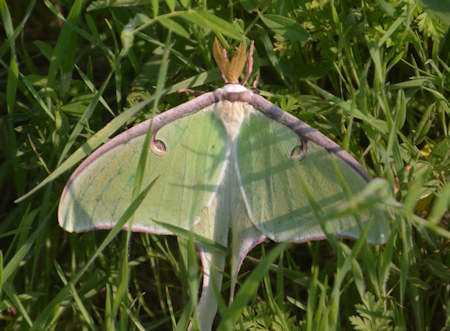 Every year or so we see one of the giant silk moths–we’ve seen Lunas three times I think, in the 20 years, and the others once or twice each, but they’re quite rare here.   The first Luna we saw was near the driveway in front of the house, on a tree trunk.   We are well into rattlesnake season (three and a half footer has already been seen)  and from now unti a hard freeze we can expect a “buzzer” (family joke name for them) any time, anywhere on the place.  It means looking down constantly, scanning a six foot width, for anything that even remotely resembles one.  They can be invisible easily, and this early in the year are still “proddy” which means easily  roused, the babies, especially…they’re hardly thicker than a finger, but they put everything they have into every bite (older rattlers may not actually inject venom with all bites.)   This year, with the pandemic and all, it would be worse than usual to get a bite that required hospitalization….which is also of course very expensive because the injections to counteract the venom is extremely expensive.  So we’re careful.  Carry sticks (for poking around and under anything, including chairs outdoors, that we consider sitting on.  As it gets hotter, rattlesnakes seek shade.

Meanwhile, the book…there’s a curse tablet that has to get into it pretty soon now, I think, but so far it’s being hard to introduce into a household with Rafe handling the electronic surveillance and former military watching for human interference.   The latest method I tried required the recipients/targets to be stupider than they are, always a bad move on the part of a writer unless there’s a really good excuse (large distraction like a bomb going off, partner’s death, serious personal injury…)   I read the first forty pages (over the phone) to my first alpha reader (back when I was just starting Sheepfarmer’s Daughter) because she’s got serious vision problems now, and she was enjoying it…so that’s a good sign.

9 thoughts on “Busy With Nothing (Not)”