Earlier this week I sent back the latest rewrite…and boy, should you be celebrating the fact that Editor held my feet to the fire and made me work the monster over again.  It’s MUCH better now.  (Editor may not think it’s enough better, as is Editor’s prerogative, but it’s definitely better.)  Among other things, while mumbling and fumbling my way through Editor’s letter, I discovered a major error of the “Could drive a fleet of 18 wheelers through this side by side” variety.

I don’t mind admitting it, now that you’ll never know what it was, or where it was.  (For those still sure that editors ruin books…someday, we’ll have a super-secret meeting and I’ll reveal one or more of my career errors that an editor saved you from having to read.)

While working on the rewrite, I had to return to my former schedule (get up, go to work, all day without a break until midnight or later)  and my body–having had a few days of healthier living, threw fits.  I kept saying “Just let me finish this one thing” and it kept saying “Heard that before, don’t believe it, stop NOW.”  Migraines, sinus pain, mouth sores, gut rebellion…and now that the rewrites are in, and I’ve spent 8 hours in the sack each night plus an afternoon nap, gotten some exercise every day,  and cooked some healthy meals, almost all those things have vanished.

Meanwhile, thinking about the next book is going on, but I’m limiting desk time, including online time.  Walked out in my new (non-leaking so far) rubber boots today, sploshing across the wet part of the near meadow and noting what was going to seed, what was in bloom, and what the water quality was.  (To seed: wild onion, wild garlic, Canadian and Virginia wild rye, white tridens,  Texas wintergrass (speargrass),  vetch, bluebonnets, some of the gaillardia.  In bloom: gaillardia, claspleaf coneflower, ratibida (another coneflower), prairie bluets, false gaura and gaura, green antelope-horns milkweed, pink evening primrose, Queen Anne’s lace.  Water quality: excellent, well filtered by vegetation and coming off the far end of the meadow perfectly clear. 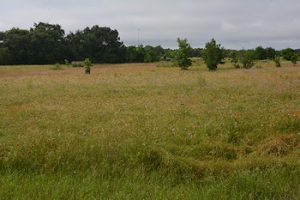 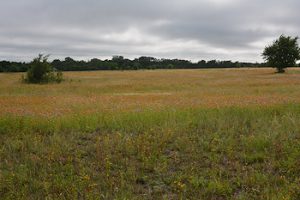 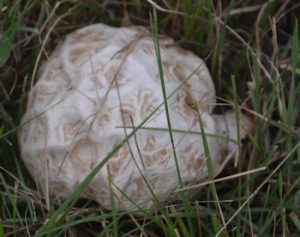 some kind of mushroom, I think, but don’t know what it is.  (Update in progress: probably a puffball of the “skull puffball” type.)

This was after one little thunderstorm with more due–warm, very humid, and though not late afternoon, already seemed dark and threatening as clouds thickened to the west.

4 thoughts on “Rewrite in…”